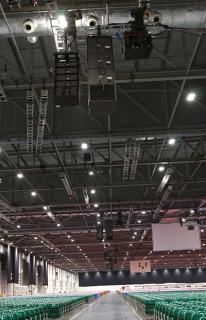 << Back
London ExCel is a difficult venue; the sound system needed to cover 20,000m2 of highly reverberant space. ‘The best way to deal with a reverberant space it is to create a direct source of energy,’ said Mark Payne, Technical Director at SFL. ‘A lot of people would install a 12-hang line array here and expect it to cover 60 to 70m, but that doesn’t work. We had been doing this event with a different system, but we recently switched to Kara because its 110-degree dispersion pattern and vertical directivity enables us to optimise the number of hangs per row.’ The vertical directivity was used to focus sound away from the ExCel’s metal roof structure. Further, Mr Payne explained, ‘This also allows us to go a little further between each row than we could before, but we stop at 36m between the hangs.’

Three hangs of six Kara each sat across the venue, with between five and seven rows – depending on the final number of attendees – covering its length. ‘The distribution of low end is in cardioid, so you end up with a much tighter bass,’ said Mr Payne. ‘When you delay speakers down a line, you need the people that are behind a hang not to hear it, but with omnidirectional bass it smears things a bit. The SB18 cardioid solution allows me to correctly align all frequencies which results in a much tighter bass image down the venue.’

SFL managed the system using 30 networked LA8 DSP-equipped amplifiers. ‘The network connection of the LA8 is a lot more reliable than other products, so we don’t get a degradation of control signal quality as we travel down the venue’s length,’ Mr Payne explained. ‘Kara is an active system, so we have more wiring but we get a lot more headroom out of it. We’ve mitigated the additional wiring by flying the amplifiers. One of the things that L-Acoustics amplifiers do really well is that they simply swap over to the analogue feed if there is a digital failure, and you just don’t hear them do it,’ he explained. ‘This gives us a lot of confidence.’

Prior to the event, Mr Payne and his team engaged in stringent digital audio and control system stress testing to ensure quality and reliability in light of the long cable run distances. The SFL crew also rehearsed the rigging techniques used at each hang.

‘I really appreciate the headroom that Kara gives us,’ said Mr Payne. ‘I was a little bit worried about changing to a new system. I needed to be confident that not only would it sound better, but also that the team would be able to put it in at least as fast. As it turned out, we’ve shaved two hours off the load in time.’

For monitoring onstage, SFL deployed its L-Acoustics X12 stage monitors for the first time. ‘I think we had the first 12 boxes made,’ said Mr Payne. ‘We had them through the summer on a pilot phase, but this was their first real time out and they were fantastic. ‘L-Acoustics has just released a new preset for them, which has really improved the limiting. They can run really loud without any obvious signs of the box protecting and the limiter squeezing in. We get so much level out of them, they sound phenomenal and they’re so physically light! They’re everything a 12XT was but lighter, louder and they’re beautifully made –the way the screws hold together is delightful, the grille is a work of art and then you look at the dispersion characteristics of the box…and they’re incredibly tough.’

London’s bi-annual Festival of Life is a major religious gathering of the global Pentecostal Redeemed Christian Church of God. Attracting 40,000 worshippers to ExCel London, the event features a mix of music, dance, drama and gospel. ‘From my perspective, the most obvious trend that really testifies to the incredible performance of both sets of L-Acoustics boxes — the Karas in the air and the X12s on stage — is, ironically, the elimination of a particular sound from my spectrum of responsibility - the sound of complaints,’ said Ayobami Olunloyo, Technical Production Manager at Festival of Life. ‘Over the years of running the Festival of Life, especially with SFL’s excellent service, I can confidently say that we have reached a point where complaints about sound clarity and levels simply no longer exist, both within our congregation and the various stakeholders on stage. This is the ultimate end result — that sound is seamless and unobtrusive in its delivery.’

Mr Payne concluded, ‘We love doing this kind of job. Gospel worship is such an energetic performance art. This congregation will sing at 96db, so we actually have two performance groups: the people on stage; plus the 40,000 audience and it’s wonderful to be able to deliver such great quality audio for it.’