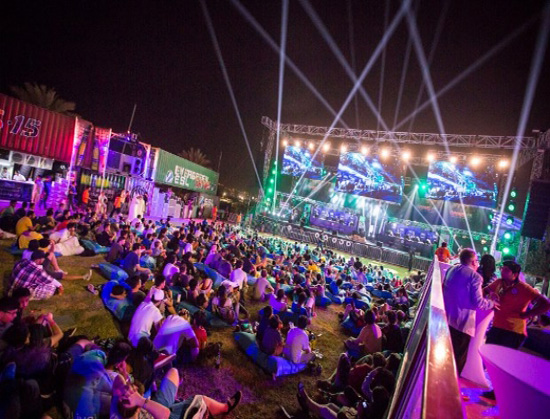 << Back
UAE: Dubai-based rental firm, Protec, was recently called in by Snap to provide the lighting, video and rigging for Games15 Middle East. The event, which took place at the Dubai International Marine Club, saw more than 20,000 gaming fans watch global teams from ESL go head to head over three days.

The Main Arena was rigged using Protec’s EHD (extra heavy duty) ground support structure which held three LED screens rigged off the 18-inch sub truss. The stage was considerably smaller than the arena shows that ESL regularly produces, so Protec took the challenge of making the stage look like an arena show for TV without the space of an arena. ‘The main issue was the width of the Main Arena rig,’ explained Protec’s project manager Simon Travis. ‘We had to make it smaller than we would have liked due to the width of the venue and access routes.’

The event was primarily for live broadcast and had a live audience. In this situation, broadcast took priority on the lighting design. Protec called on 24 Clay Paky K20 B-Eye and eight Mythos fixtures along with Molefays for the main stage. LED pixel smart fixtures added some ambient lighting in the main audience area. The large cinematic set, built out of shipping containers was subtly lit to add to the scenic surround feature.

‘Our lighting designer worked closely with the TV director to make sure colour temperatures and exposures were matched across the 10 HD cameras being used to capture the event,’ noted Mr Travis. ‘His biggest challenge was to light the players, but not directly, as it could have distracted them during the game.’

Protec’s lighting designer, Aaron Russ, used both side and bounce lighting to light the players in their booths. This made the process of eliminating shadows a little more of a challenge. Heat was another issue as the booths were small and confined, so the rental house turned to Pixel Smart RGBWA LED fixtures. The colour temperature could be tuned for the cameras with minimal heat output, while keeping the fixtures in close proximity to the players.

To create a more ‘arena’ feel to the relativity small stage, Clay Paky Super Sharpy fixtures were used for beam effects. This allowed the effects to be seen through the rather bright ambient light of the Dubai Marina without taking up too much of the stage real estate.

Protec Video used an Encore VP System for the Main Arena stage. It required a simple system that could handle an HD-SDI signal with minimal latency loss. The Encore System was reportedly able to prevent any lip syncing issues that may have occurred due to the fast pace action of the event.

Protec also had its own stand at the exhibition where the company showcased two of its large single armed robots that held an LED screen each to provide an added attraction for the visitors. The robots were programmed to perform choreographed movements with the screens.

‘Being the first full scale gaming event in this region, it was a learning curve for all of us and to have the depth of resources that Protec have to hand was a great help,’ said Snap director, Darren Hodge. ‘As usual nothing seemed a problem and there was always help and creative assistance immediately available from Protec.’