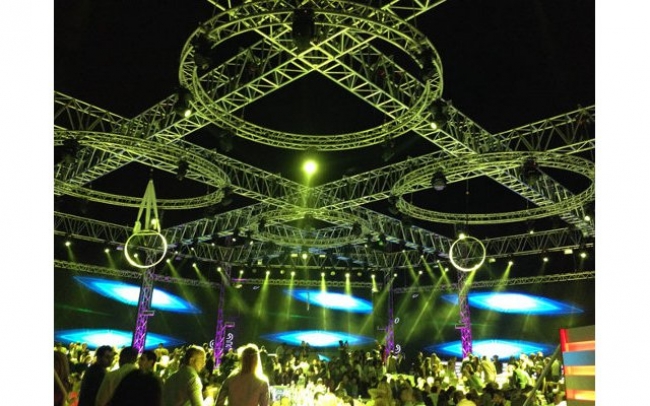 << Back
UAE: Dubai’s White nightclub opened at Meydan Racecourse’s Grandstand Rooftop under a structure from Eurotruss. The decagon-shaped aluminium TT Ground Support structure forming the venue consists of over 200m of TT series truss, holding together a body composed of 10 towers with a 33m span each.

The structure includes four circles of 6m diameter and 50m HD44 Box Truss as well. The space is levelled using 250 pieces of Eurotruss Stage Decks that can support more than a 1,000 people. ‘Eurotruss’ support, from the team in The Netherlands, was key in delivering the project on time,’ said George Germanos, head of the technical department.

Dubai-based company Procom and Eurotruss teamed up to make this job happen in only four weeks. Along with its sister company in Lebanon, Prolites, Procom-ME designed and supplied the lighting, video and trussing equipment and installed the venue in a four-days.

Two large airfreight shipments were organised by Eurotruss to get all the materials from The Netherlands, through Istanbul to Dubai and deliver it straight on to the Meydan Racecourse having a team of riggers and stagehands waiting to start setting up the scene immediately.